A dynamometer is a device for measuring force, torque or power. A dynamometer can be also called a force gage (force gauge) it is a measuring instrument to measure a force during a pull or push test. There are two types of force gauges: digital and mechanical. A digital dynamometer is a hand-held device that contains a loadcell, an electronic part, software and the LCD display. The loadcell in this instrument is an electronic device which converts force info an electrical signal. During a mechanical influence the force being sensed deforms a strain gage which converts the deformation to electrical signals. The software and the electronics convert the electrical signals to a force value that is displayed on the LCD display. The units of force measurements are most commonly Newtons, Pounds or Pascals. Dynamometers, depending on the integrated loadcell can measure a very small or a very high force. Hanging scales or crane scales can be used as a dynamometer as well for tension force measurements. Some examples of force measurement: quality of spring, wire testing, strength. Also more complicated tests can be performed using a dynamometer such as peeling, friction, texture. 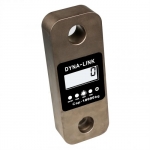